Right before I start, do not try this (or anything else on my blog) at home. Should something go wrong, I would have your loss of eyesight on my conscience. Not because I have done anything wrong, but because you were a tool and ignored my advice. I only blog about stuff that I am doing so you can see what I am doing, not so you can try it for yourself. Ok enough of that for the moment!

I used to wear solid clear lenses whilst airsofting, they give great clarity of vision but steam up in the heat of the action rendering them temporarily useless and a safety risk if you take them off to clean them.

Then an airsofting friend introduced me to metal mesh lensed goggles which never steam up. The downside is that they block some of your vision, and make things generally darker.

Before going to bed last night I thought what about meshed clear lenses? i.e. Clear lensed goggles with loads of holes drilled in them for ventilation, just like the metal meshed goggles?

I have some ballistic clear engineering plastic in 1mm thickness in my workshop, a CNC router to cut them and an old pair of these metal meshed goggles to act as a donor. So why not give it a go? So I fired up SolidEdge2D designed the lenses, calculated the toolpaths in CamBam and exported the GCode to EMC2 on my control PC.

Then I set about cutting out the lenses. Please note that the plastic does not look clear as it has a polythene protective film on the front and back. 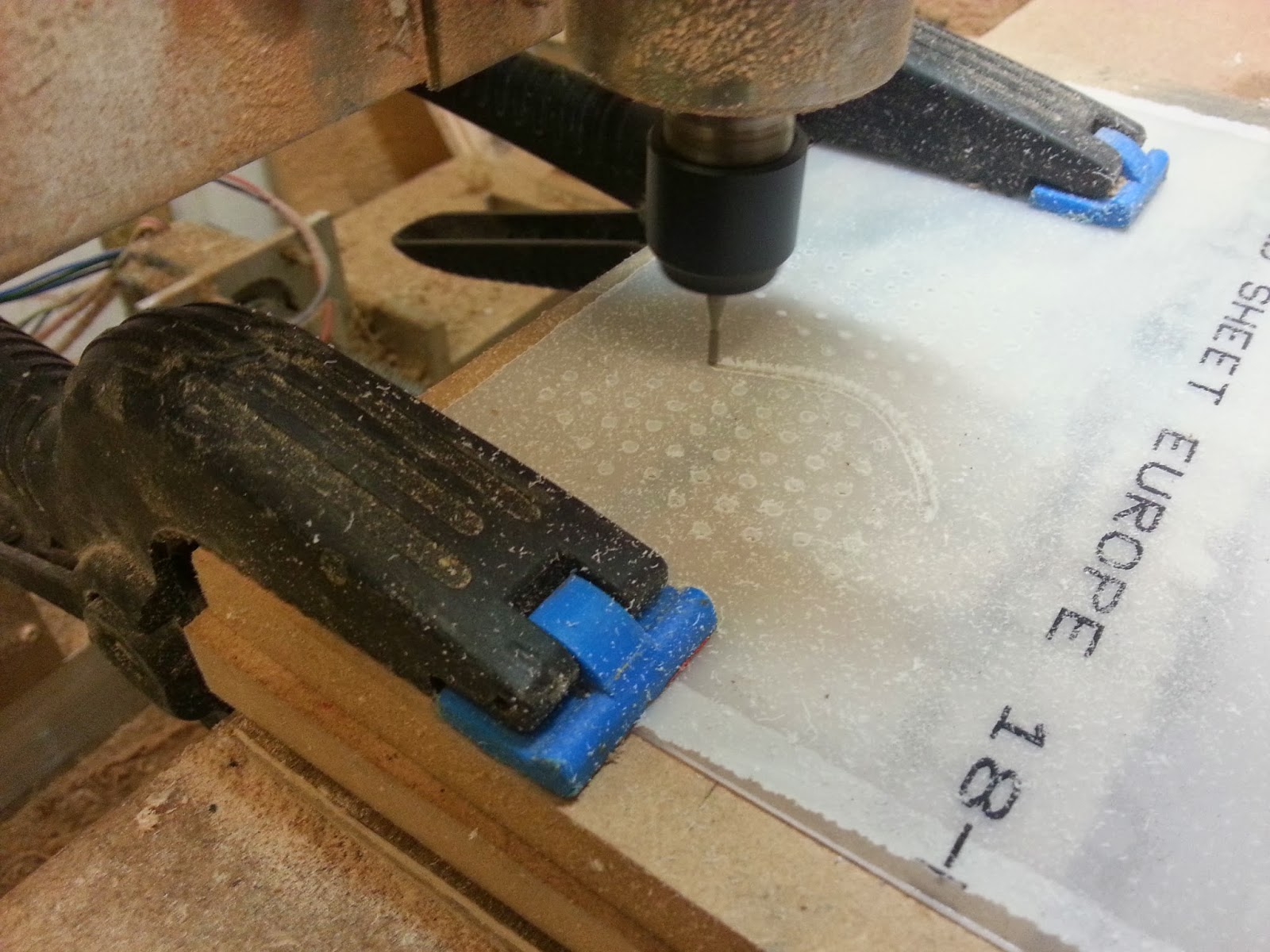 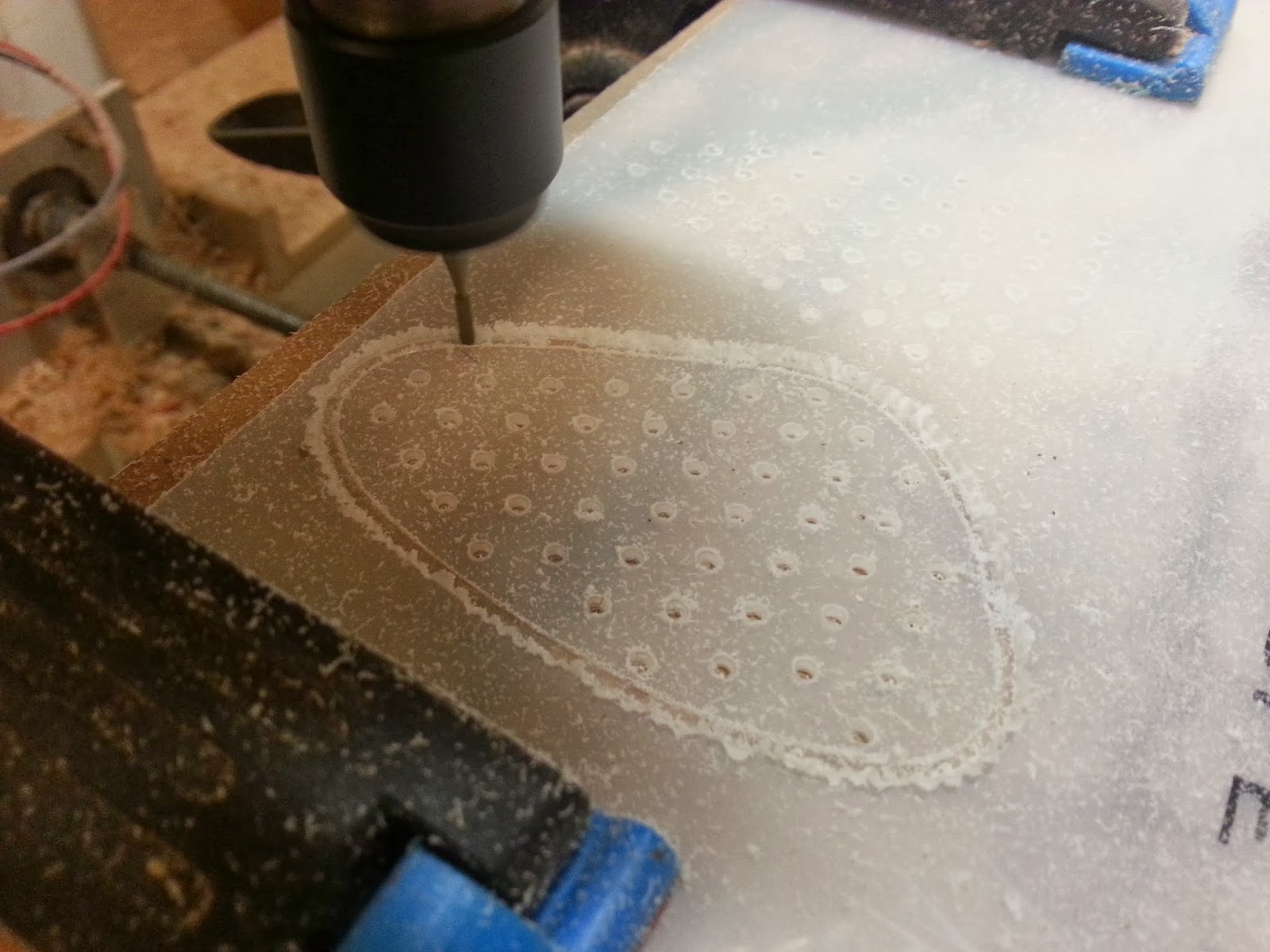 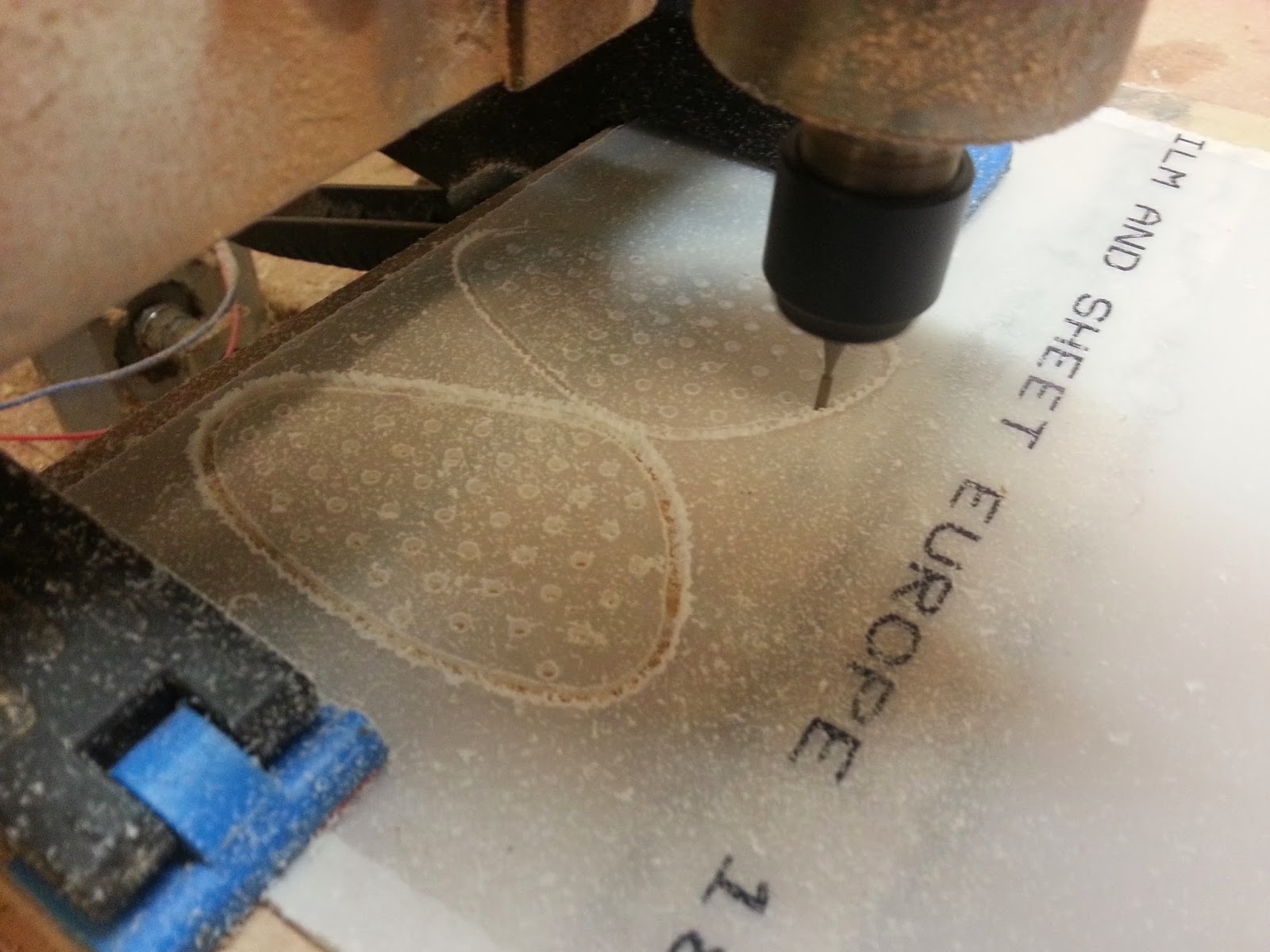 Here is one of the lenses with the protective film removed. 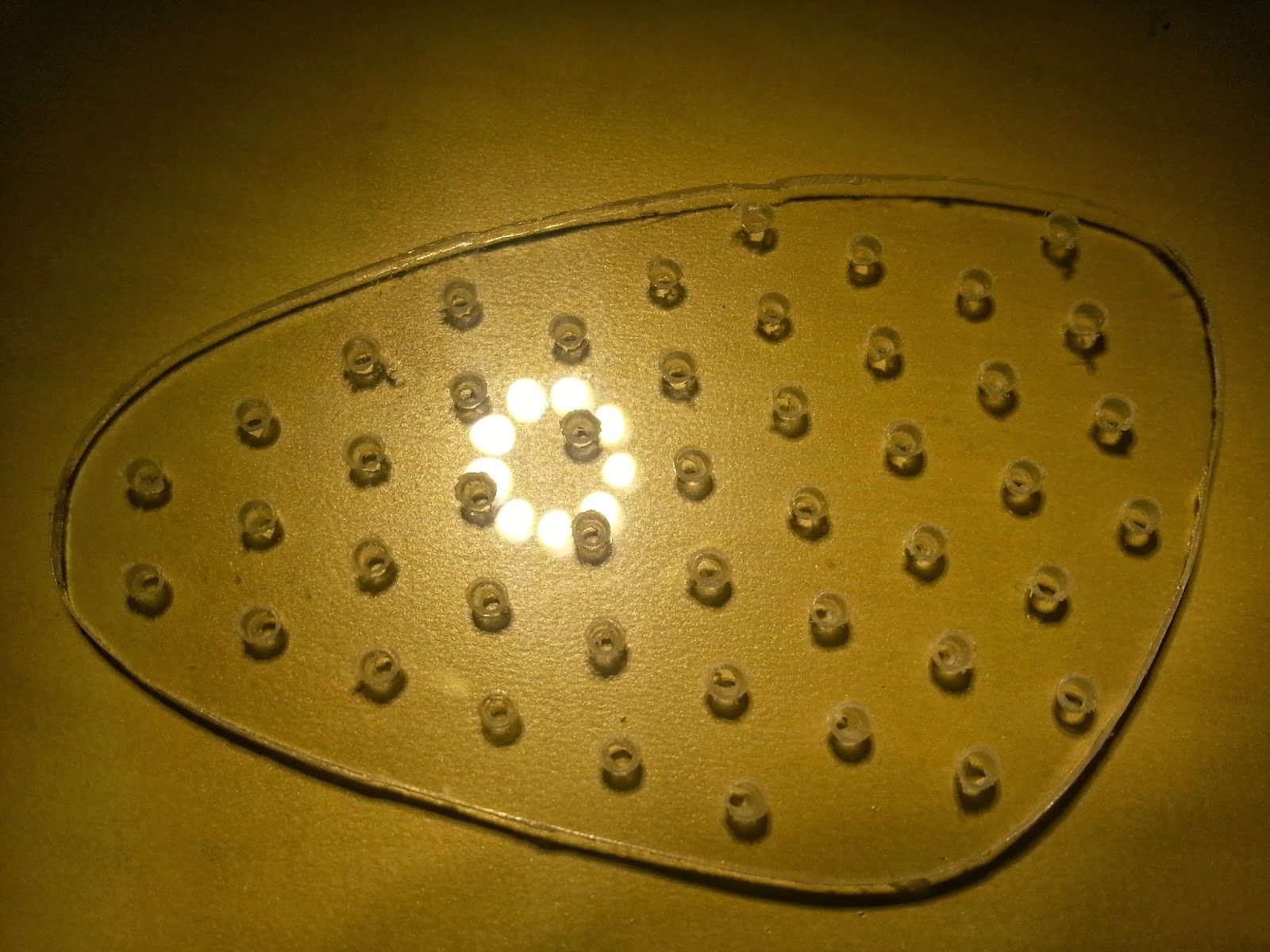 Here is the finished goggles with the clear lenses fitted. 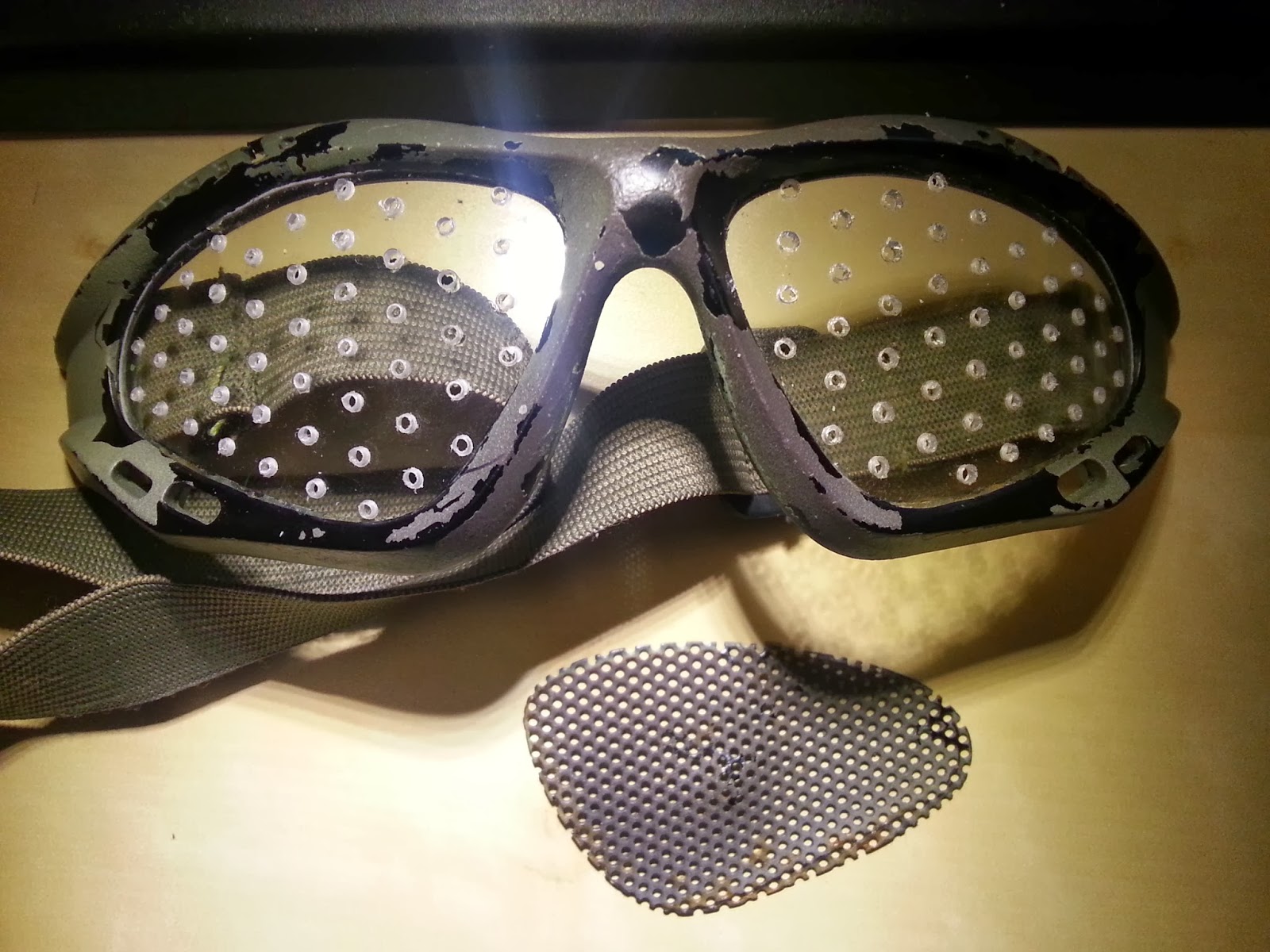 They work really well and the clarity of vision is as you would expect better than metal mesh but not as crystal clear as solid clear lenses. I have as yet been unable to steam them up by wearing them! I might have to wear them in the shower! I would describe the vision from them as like wearing spectacles in a light rain shower.

Even when I deliberately steam them up by breathing on them, I can clear it within seconds by shaking my head around a bit to get the air through them.

So at this early prototype stage it looks like a good result however I have still to safety test them by firing at them repeatedly. I will also have somebody shoot them at close range with a hot sniper rifle.

Remember the warning from the start of this post. Just DO NOT ATTEMPT THIS, please! I have used special ballistic engineering plastic which is not readily available, other plastics such as plexiglass or acrylic would NOT be suitable.