I had this idea for an electronic hit detector that would register a hit of an airsoft beeb and could be used in various props. This post is about the sensor circuit itself. In later posts I will detail the use of this sensor circuit.

Spoiler alert: If technical stuff bores you, skip straight to the video near the middle of this post.

I thought the most likely candidate for such a sensor would be to base it upon a piezoelectric transducer which is a little ceramic disc that outputs an AC voltage when squeezed.

I'm pretty sure I am not the first to have this idea, and for the record I am not claiming to be the inventor of such a sensor. In fact I would be surprised by anybody alive claiming intellectual property rights as the circuit which I am about to describe that makes such a sensor possible was invented by Karol Pollak in 1896.

If I could build such a circuit and link it to a logic board which would contain some airsoft 'game' logic, it might make for an interesting prop. For example it may be used as a target which must be hit X number of times for the objective to be won or more than one of these linked sensors may need to be hit in a particular order. I'm sure you get the idea and can think of possibilities of your own.

As a logic board containing the game logic will run on DC voltage, the AC output from the piezoelectric transducer must first be converted to DC, and this is done with a variant of Karol Pollak's bridge rectifier circuit.


I will explain in lay terms what is happening in this circuit from left to right. On the left the piezoelectric transducer (denoted by a tilde ~) is squeezed as it is struck by a beeb which outputs a a wavy AC signal. The AC output travels along the circuit until it hits the diamond shaped arrangement of four diodes, which act like one way valves. These four diodes convert the wavy alternating voltage to a one directional direct voltage which can be used by the logic board.

The usual way to experiment with these things is to first build the circuit on a reusable experimentation board known as a bread board, and this can be seen in the next photograph. 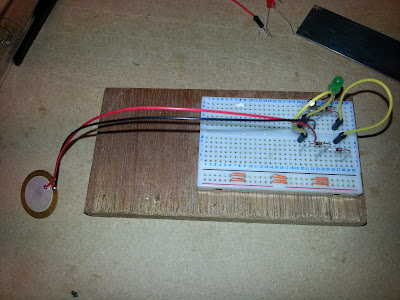 I added a green LED to the circuit and turned the lights off while tapping the piezoelectric disc (on the left). The LED just lit up for the briefest of moments, indicating that the circuit worked and could be used as a sensor. Luckily I found a superbright red LED which I fitted and made this short film, following an earlier fail (I will come to that), I protected the sensor from the direct beeb strikes with a temporary sheet of 3mm Lexan.

The previous film was a failure as I can confirm that piezoelectric sensors are not very robust (duh!) when taking point blank beeb hits. :D


So with a working experimental version I built this tidier soldered prototype on prototyping board. 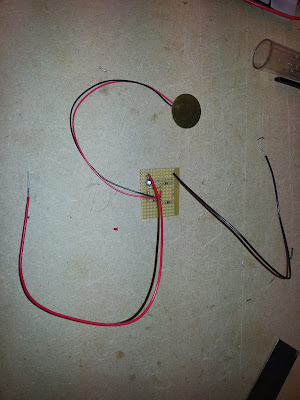 The black an red wire tails will be wired to a logic board which will be the brains of the sensor. I have in fact (at the time of writing this) already hooked up this sensor to a logic board and I am getting usable and reliable results. However these results are still in a raw state and I am still working out exactly how I intend it to function. When I have done that I will, do a more detailed post on the logic controller.

In the meantime here is a closeup of the simple prototyped circuit. 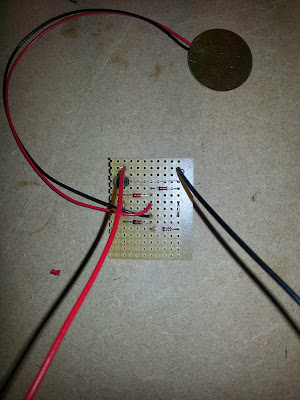 As I said at the start of this post, I really only wanted to cover the sensor circuit here. In future posts I will detail it's use as a prop in airsofting.

Thanks for reading and stay tuned, shortly I will have a working application for your interest!  :)

Update 13 Jan 2014, PM
I have been asked for a bill of goods for the circuit. Here is what I purchased from my preferred components supplier, RS Components. The downside is you need to buy significant quantities of the components as they sell in bulk. However this is still more cost effective than buying from Maplin who charge like a wounded rhino. For example the capacitors I bought from RS Components are over ten times more expensive when purchased from Maplin, the diodes over twenty times more expensive.


Some things to note:
If I get time I will also post a Fritzing circuit diagram.

Here is the Fritzing diagram 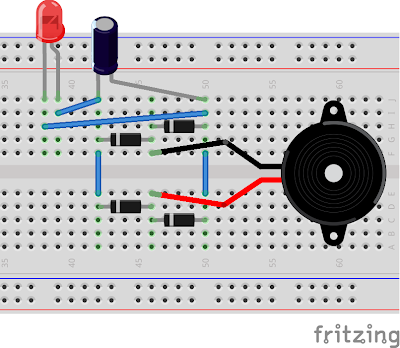