It is surprisingly easy to build your own monitor for a desktop computer by recycling the flat panel display from an old laptop.

I had an obsolete HP laptop with a nice 17-inch display which was about four years old. It had long since been replaced by something a lot more capable.

From that old laptop I built this monitor..

This blog post is how I got from old laptop to new monitor. It was not terribly challenging and I figure most people have an old laptop somewhere and could tackle this kind of project in some shape or form with a minimal set of tools and electronics experience. I do not want to mislead any reader into thinking that I came up with this method for recycling old laptop displays. I know for a fact that I did not, and there are many tutorials on YouTube, Instructables, etc, which I urge anybody thinking of following in my footsteps to view. This is just a record of my attempt at this kind of project.

The first step was to power on the old laptop, and actually check that the display functions and was not faulty. In particular I was looking for those annoying dead or stuck pixels...

I personally can't live with those and I would not put the effort into this project if the donor laptops display had any of these faults.

The next task was to carefully take apart the laptop. There was no point in using brute force here as flat panel displays are quite fragile and very easily damaged, so carefully with screwdrivers I unscrewed anything I thought may be holding the display in position. I carefully set the screws aside in the order in which they were removed in case I wanted to put the laptop back together again or in case I wanted to reuse the display casing for the new monitor as well as the flat panel display itself.

After taking apart the old laptop and gently disconnecting everything connected to the flat panel display, I had to find out the exact model and who made the display. This step is essential to purchasing the correct electronics I needed to convert the display from a laptop display to a monitor.
The make and model is usually displayed on the back of the panel on a sticker...

It might surprise readers that even though this was an old HP (Hewlett Packard) laptop, the display was in fact made by LG. Just because a laptop is sold by a particular manufacturer you cannot assume that the display was also made by that same manufacturer.

Armed with the make and model I searched Google for lp171wp4 tl n2 controller... 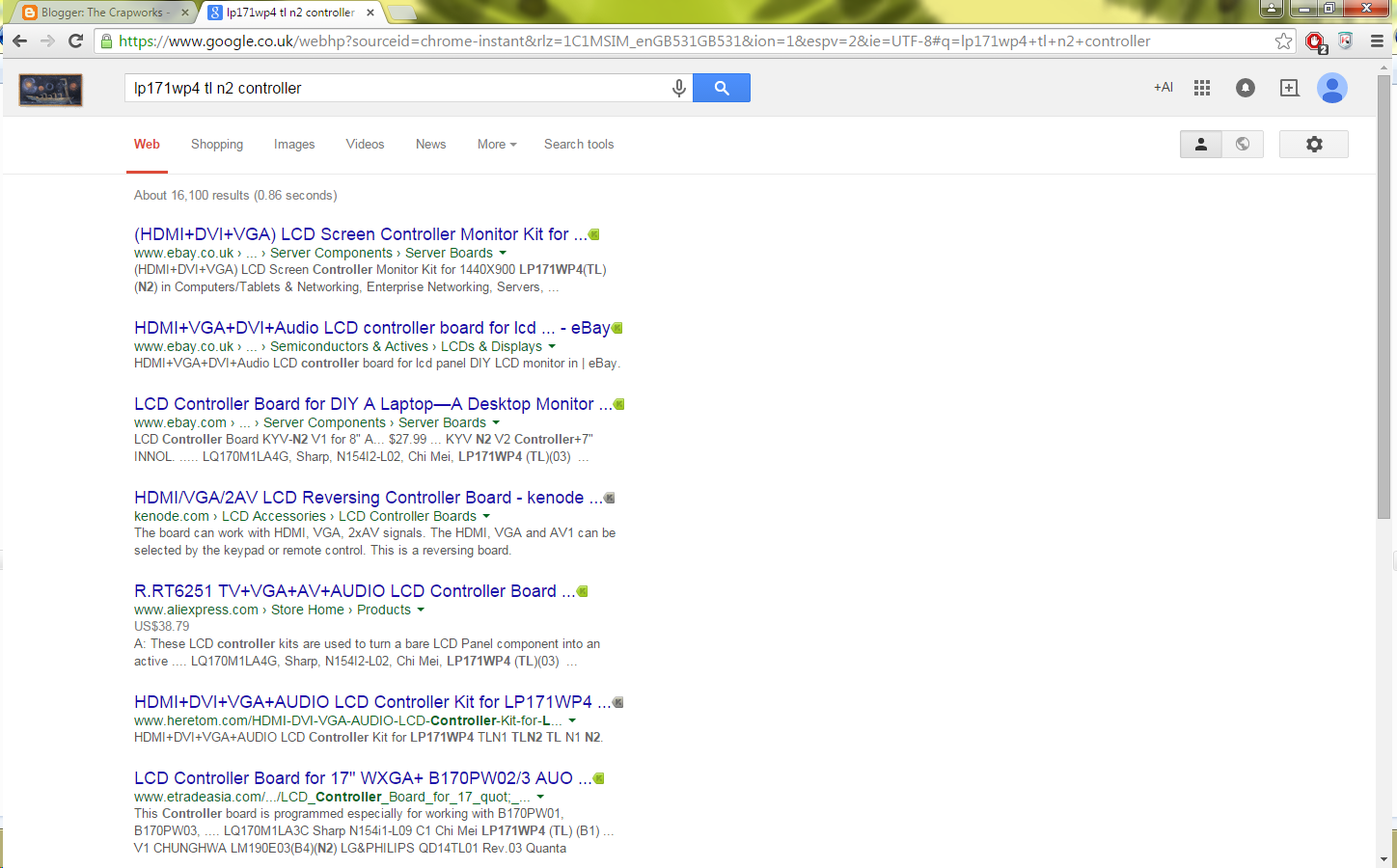 Which returned a load of results. I bought my controller electronics from eBay seller njytouch for US$37.49 including delivery from China. The electronics arrived as promised a couple of weeks later. 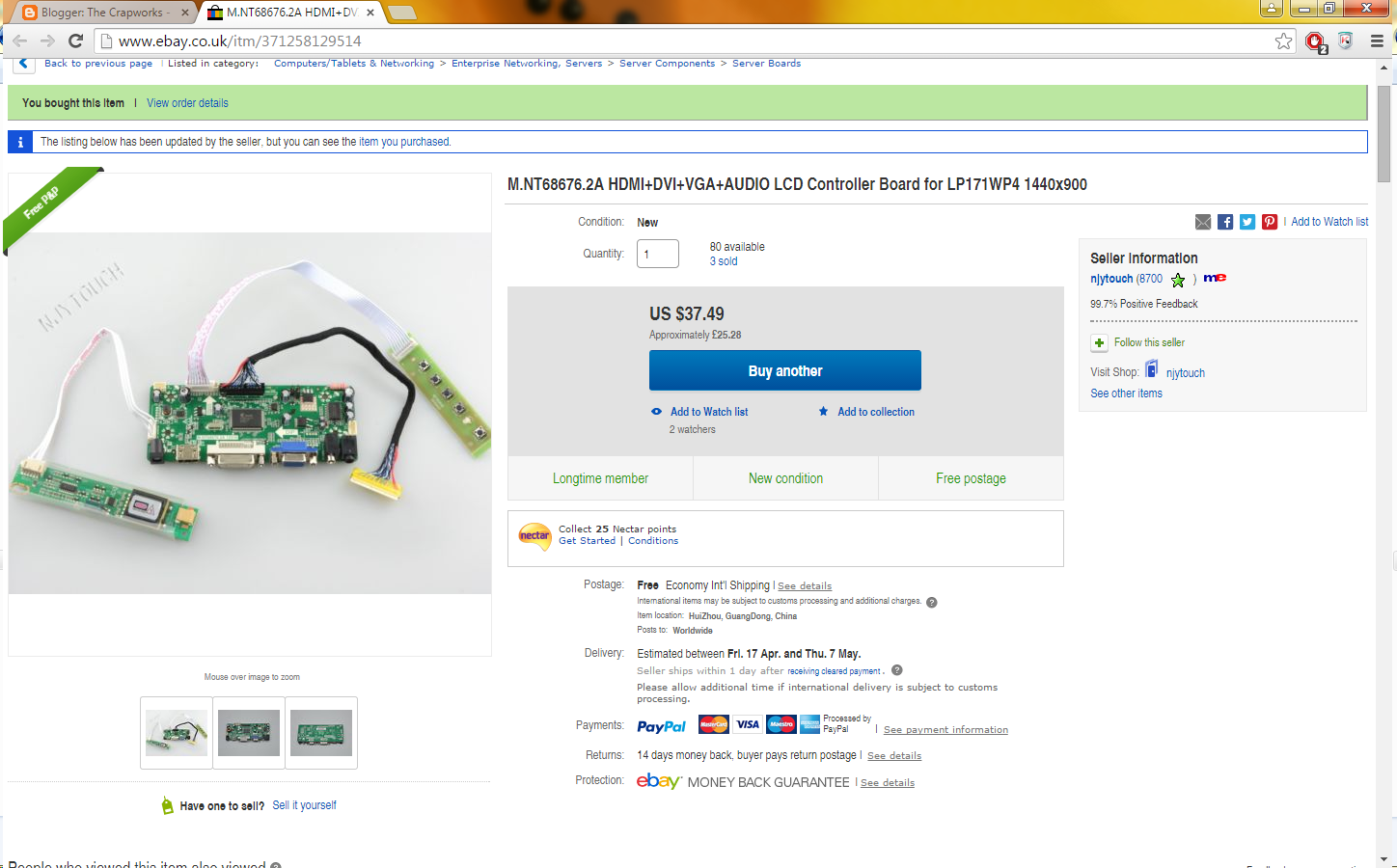 The electronics are quite simple to assemble. The connectors only plug in one way, and as long as you do not force anything, it is very difficult to screw that up.

These new electronics replaced all the electronics from the old laptop. It is simply a case of swapping out the laptops electronics for these electronics. No tools required! The main board supplied by njytouch has a number of options for connecting to your desktop computer.VGA, DVI-I and HDMI. Of these three options the lesser is VGA which is an old school analogue signal. DVI-I is a better quality pure digital video signal and HDMI is digital video and sound combined. I opted to use the HDMI connector.

The black cable with the golden connector you can see attached to the main board plugs into the back of the flat panel display. The only other connection to be made is the tiny 'lamp' cable coming from the back of the flat panel which plugs into that orange/peach coloured connector on the lamp board. Two connections are all that are required to complete the electronics part of this project. It was now a question of connecting my desktop computer to the mainboard with a HDMI cable and powering the new monitor with a DC power adaptor and I had a working if not very pretty monitor.

Njytouch recommends powering the controller with a 12 volt, 4 amp DC adapter, and sells an adaptor to do this from his eBay page. I actually had a 12 volt 1 amp adapter in my spares box from an old Netgear router. Although this adaptor could supply less current than recommended, it worked and saved me having to buy another adaptor.

Now that I had a working and functional monitor, I had to decide what I was going to house the electronics in.

My choices were:
As there was no need to make a rush decision, I actually opted for choice #1 for two weeks. As this would be a second display on my gaming battlestation, this enabled me to position the new monitor in various locations and orientations. For a week or so I had the new monitor in the "portrait" orientation instead of the traditional "landscape" orientation. This was not as useful as I hoped with software applications optimised for viewing in landscape. Those two weeks were useful in determining that the best location was at the same height as my existing display and the best orientation was landscape.

After toying with the idea of building an elaborate and beautiful hand carved case, I decided to build one from some nice Baltic Birch furniture plywood I had in my workshop. Before I get into that the simplest choice would have been choice #2, to re-assemble the display half of the laptop, and this is in fact what most people who do not have access to a woodworking workshop actually do. This is illustrated quite well in this lifehacker post, where the original display case has been reused and augmented with a Mecanno stand. I have also seen Lego used like this to build a stand.

I decided to build a case with the 18mm thick plywood with very simple and clean lines. the look I was going for was "if Ikea built monitors". The main tool I used was my home built CNC Router Robot which I have described in an earlier post. I could have made this just as well on my bandsaw and router table.

After making detailed measurements of the parts, I designed the casing in Siemens Solid Edge ST7 and imported the DXF drawings into CamBam...

From there I exported the toolpaths to G-code and cut them on my CNC Router...

I cut all the parts like this then finished them by hand with a Japanese pull saw, then 80, 180 and 400 grit sandpapers. All that was left to do was assemble the parts with wood glue, let that dry and then give the entire assembly a rub down with Danish Oil.

The electronics were stuck to the back of the monitor with double sides foam tape then screwed to the back panel for extra robustness.

Here you can see the monitor as it is today, including the control panel that I also made from plywood attached to the bottom of the display.

This was quite a satisfying project, and while I appreciate that not everybody has access to these kind of tools, the actual process of converting a laptop display to a monitor is within most peoples abilities. Your choice of casing doesn't need to be as elaborate as mine. I hope you enjoyed reading about it as much as I enjoyed explaining it.

You can download my DXF files here.
Posted by BigAl