Spray painting a DIY camouflage pattern can have varying results. I have seen some very good and some very poor results. I think the difference between the two is partly luck and partly artistic skill.

For the rest of us who are unlucky and the artistically challenged I wanted to experiment with an effective pattern that anyone can apply with a minimum of fuss. Like most things on the internet, they probably have been perfected before, however at the time of writing this I am unaware of an similar explanation of this technique.

I'm calling this pattern Skrimtarn. Skrim is used as the stencil and 'tarn (Tarnung)' is the German word for camouflage, as in 'Flecktarn', literally 'spot-camouflage'. I think it looks quite organic, almost like snake skin.

I started with some matt black parts from a G36C, two colours of spray paint and an old skrim net scarf.

Over the parts I placed the old skrim net to act as the stencil. 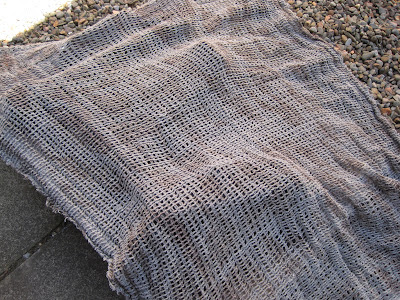 And applied a mid-brown matt spray paint to the parts, and immediately removing the skrim, before it dries at all. 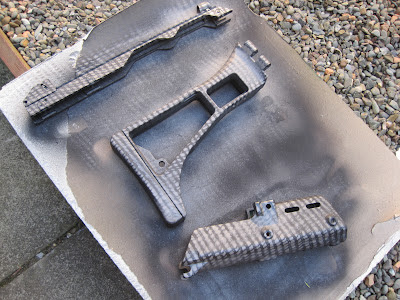 A nice effect but still very regular. Time for another colour and more variation. This time I will use matt biege, and mask some of the parts with skrunched up paper, as shown below. 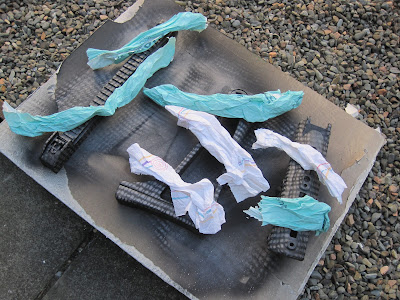 Again I cover the whole thing in skrim, however the paper will prevent some of the paint from landing on the parts but also it moves the skrim further away from the object to be painted giving a less distinct and softer pattern. The closer to the part the skrim is, the more pronounced will be the pattern. The further away, the less distinct. 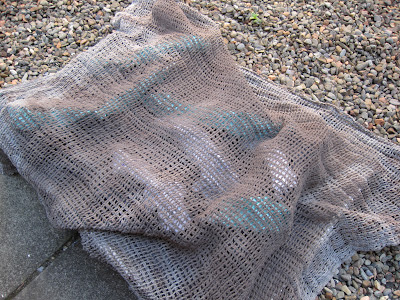 The purpose of camouflage is to add texture and break up the lines of the part. In the photograph below (and in more detail at the start of this post) you can see the finished result. 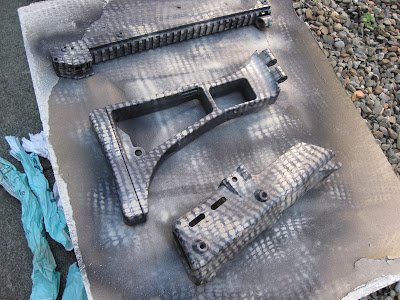 The good thing about this technique, is that it is repeatable, and doesn't rely on luck or artistic skill.

It's legal for me to do this, however under certain circumstances in certain countries this may be illegal to alter a particular kind of weapon, even by simply painting it. I would recommend that you check first before doing anything like this, and if your unsure, do not do it!

My Attorney Mr Lionel Hutz, AKA Miguel Sánchez, AKA Dr. Nguyen Van Falk would like me to share this message.

Update: Some pics of the entire re-assembled weapon, as requested by zacktyzwyz and others.

Note how the edges are less distinct on the sprayed parts.

Obviously different colours would be appropriate for different environments.
Posted by BigAl