Converting an Airsoft VSR to a Lee Enfield No4. Rifle

This post is a brief overview of my adventures in converting an airsoft VSR springer bolt action rifle to a Lee Enfield No4 service rifle for the purposes of WW2 re-enactment. Before I go anywhere with this post can I bring to your attention that I do not recommend that you do try this at home. Usually my main reason for warning against this is so that you do not cause injury but as this project involves the manufacture of a Realistic Imitation Firearm (RIF) you may be breaking the law by doing so as well as risking injury. So it's a double do not try this at home.

I cannot claim credit for being the first to do this. I have been inspired by other people attempts to build an airsoft Lee Enfield No4. For just slightly more money I could have bought a ready made airsoft Lee Enfield, but I wanted to ensure that the internals were of a known quality to me, as well as enjoying these kind of projects. What could possibly go wrong?

This is a picture of what I started with a airsoft Tokyo Marui VSR and an genuine unissued Beech wood Lee Enfield forestock kit from 1967. I'm guessing that this was made by the Ishapore Rifle Factory in India. The butt stock that I was sold with the forestock does not in fact match. It is stamped 'S' which indicates that it was made in the USA by Savage-Stephens Firearms for use by the British Commonwealth under the Lend-Lease Program, almost certainly during the war years. You can see the difference in colour as the buttstock has been issued and oiled by the soldier it was issued to. The forestock is bare wood. You can also see a few of the genuine issue steel stock fittings that I also purchased. No wartime parts were hurt during this project. I would personally not be happy about hacking up a piece of wartime history, on the other hand an unissued 1967 stock is fair game. 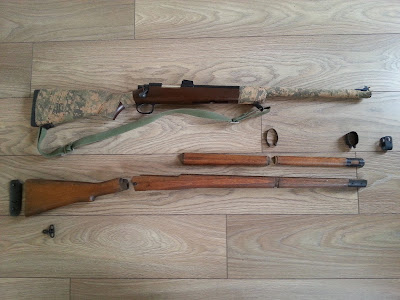 I had to chop a huge amount of wood out of the 1967 lower forestock to accommodate the VSR action. You can see in this next photo all of the milled wood and the second magwell (on the left) cut to take the VSR airsoft magazine. The cut which looks like an accident in the bottom left of the stock is a rebate so that the hop can be adjusted. The cut at the top right is to accommodate the bolt in the firing position. 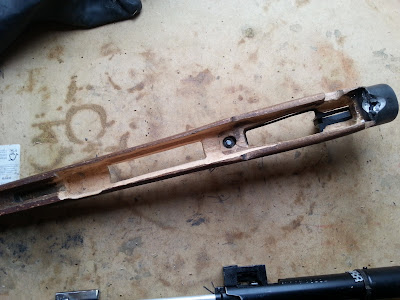 All the woodwork was cut by hand using manual hand tools by trimming a millimetre of wood, trial fitting the action, noting where the stock needed to being trimmed again, then repeating and repeating until it fit correctly.

I had to trim the upper forestock by hollowing it out to an almost eggshell like thinness to accommodate what is left of the VSR outer barrel, and hop chamber (where my thumb is). Because the upper forestock is now so thin, I thought it better to reinforce where it hooks under the retaining band (far right) with that perforated steel sheet, which I epoxied to the wood. 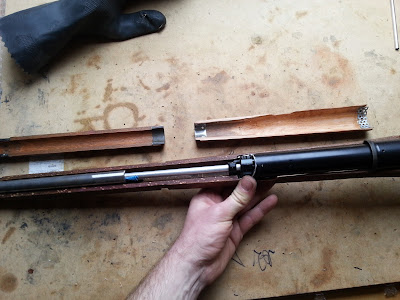 Notice that one piece of the upper forestock (far left) has not been modified at all. This shows just how much wood I had to remove in the other piece. You might also notice the original VSR barrel (where my thumb is) had to be cut. The remaining portion of VSR outer barrel fits with the hop chamber and houses the moving piston. In all it is a very tight squeeze to get the mechanism to fit. The tolerances are in the sub-millimetre range. The last thing to note in this picture is the new outer barrel with the inner barrel shimmed to a tight fit with blue masking tape which you can just see poking out.

This next picture shows the new outer barrel which is 300mm long, 16mm outside diameter precision steel tube with 3.2mm walls. 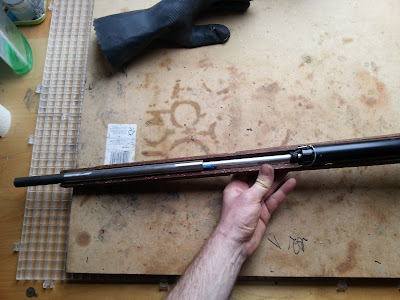 Here is the rebate that I cut in both the upper and lower forestock for adjusting the hop. 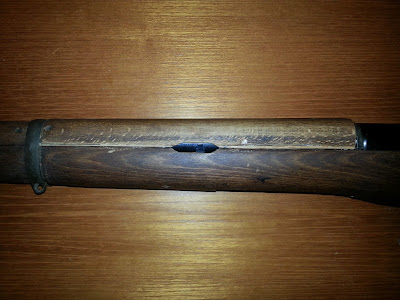 So after all that chiselling, milling, sanding and sawing wood, came rest of the metalworking.

Using a genuine unissued steel Lee Enfield trigger guard and magwell, I had to fabricate the band that joins the buttstock to the rest of the rifle. This was a piece of 40mm diameter precision steel tube inside which I had to weld a bracket and a nut to receive the buttstock bolt. I had to deform the circular shape of the tube significantly to match the profile of the stock. This was all welded to the trigger guard. 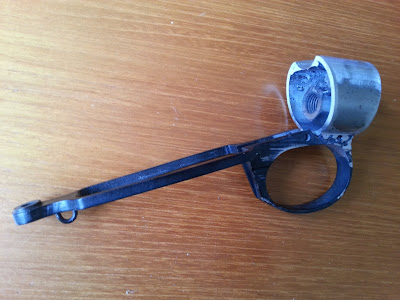 Next I finished all of the new metalwork with gun blue. Gun blue is actually a soup of various strong acids that oxidise the surface of the metal and flesh. In this next photo you can see that the gun blue melted through my thick rubber gloves. 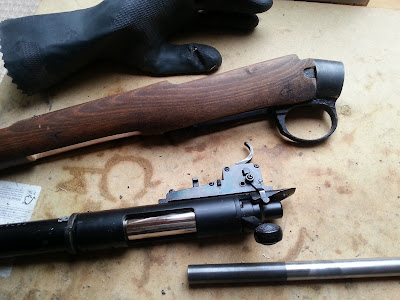 Gun blue does give a much more authentic finish than paint. As can be seen from this next part.

I have found that getting hold of a magazine is surprisingly difficult considering that there must have been at least 50 million of the things made considering that 17 million Lee Enfields have been built. So I decided to make my own from a coffee tin and some plywood. I made it in two symmetrical parts of shaped birch ply covered with the thin coffee tin steel sheet. This photo shows the first half trial fit in the magwell. 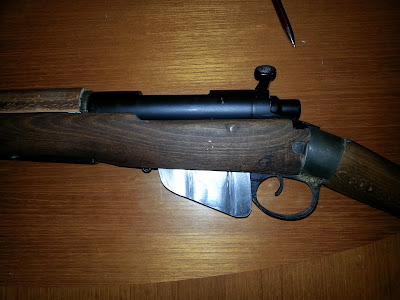 This is the finished mag after it has been blued. I am quite happy with the way it turned out. 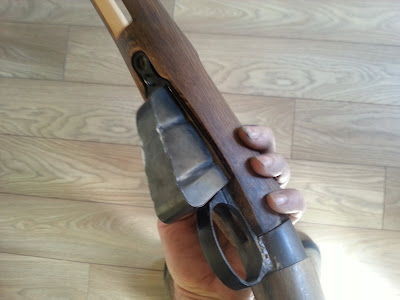 Here I have added a rear sight from a Lee Enfield P14, if I can find a No4 sight at a reasonable price I will replace it, however it will do for the moment. This is also another shot of the mag. 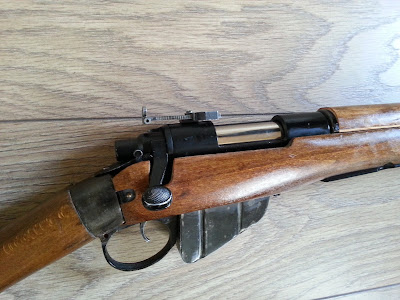 All that was left to do was to give all the woodwork a good coat of linseed oil. Also shown in the photo above. The gloss finished has now dried in to a nice hard satin dull sheen by the time of writing this.

Here are a number of photos of the finished weapon. Most were taken with an SLR sling, but the final photos with the spike bayonet show the correct Lee Enfield sling. 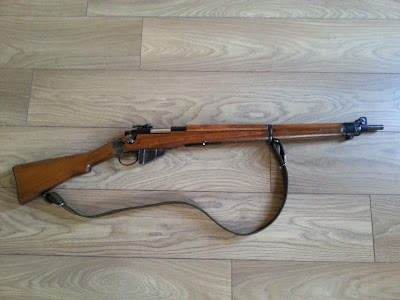 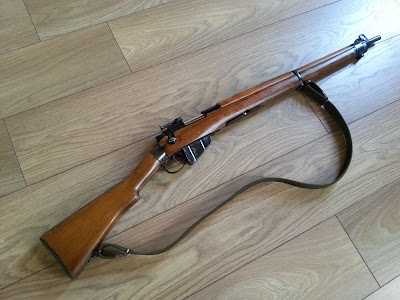 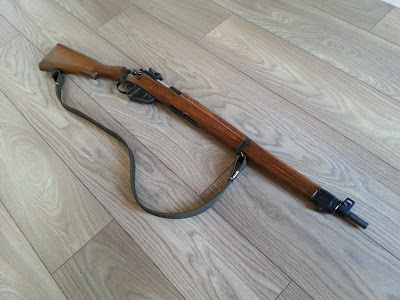 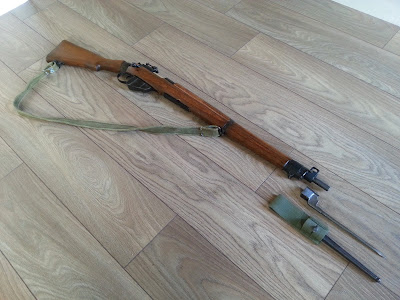 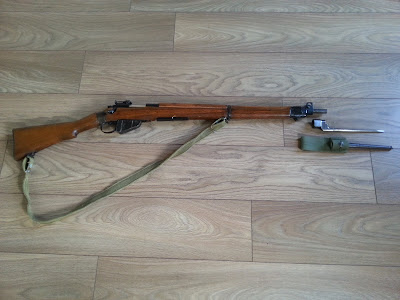 I'm quite happy and can't wait to try it out are my local site with all the rest of my WW2 kit.

Thanks for reading. If you want to leave a comment, please do so by clicking this link and not by using the blogger comments below which do not allow me to reply. :D